Once again, the discussion surrounding open marriages has been reignited. Singer Teyana Taylor recently caused controversy when she revealed that she has had threesomes with her basketball player husband, Iman Shumpert. The relevation was made on a song from her new album, K.T.S.E, titled ‘3Way’. As a avid user of Twitter, I couldn’t help but read the tweets in response to this revelation. While many users seemed to disagree with what Taylor defines as a ‘no limits’ marriage, some people embraced the idea of having an open marriage as a whole.
This post is a collaboration with fellow blogger and v-logger Wini Boansi. We both have different views on the subject of an open marriage.
I DISAGREE with the idea of an open marriage and I will tell you why…
Marriage is a sacred union involving two people, and when God created marriage, that’s what exactly He intended it to be. Two people come together, celebrate their love and promise to honour each other until death parts them. That’s what marriage is. Marriage is challenging enough with two people in it, so can you imagine the impending disaster that would inevitably come from adding a third person into the mix? In her explosive 1995 interview with Panaroma, Princess Diana, when asked about the breakdown of her marriage to Prince Charles, said ‘ Well, there were three of us in this marriage, so it was a bit crowded’. There’s no denying that monogamy is the foundation of a successful marriage. Once one person has been unfaithful, the whole relationship is immediately in jeopardy. While some couples may be able to pull off having an open marriage, there’s no denying it is a high risk proposition.

Love and commitment should be the foundation of any relationship, whether it’s a  partnership or a marriage. A lack of trust is like a broken mirror, it can be fixed but you can still see the cracks. Despite the difficulties of marriage, it has stood the test of time. There are many wonderful examples of couples who have made it work, so why is marriage being redefined? In my opinion, an open marriage is a free pass to cheat. It is a selfish decision which is usually enforced by one party, as they relish the opportunity to do who and what they please. Due to external influences such as social media, our moral climate is shifting, but please, let’s not act like marriage is whatever we want to make it.

Wini Boansi AGREES with the idea of an open marriage and she explains why…
When people live their lives differently to ours, everyone goes into attack mode. Sexual liberation has almost become a phenomenon in our society. Women are definitely able to live their lives and do as they please with their bodies, however, when a woman comes out to say that her and her husband have an open marriage and they are happy, all of a sudden our support for women’s rights to make their own decisions go out of the window. The comedian Mo’Nique was criticised when she revealed she was in an open marriage.

I can understand why some people detest the idea of an open marriage, however restricting the liberation of others is closed minded in a sense. It really isn’t our business how couples chose to spice up their marriages. Marriage is all about love, respect, understanding and building a life with the partner of your choice. If that couple fulfils all of the mentioned traits and they have a mutual agreement that allows them to have sexual relations with others, what is the problem?
Clearly their marriage and sexual choices were discussed prior to marriage, and both parties are comfortable with this set up. If this wasn’t the case, then I could understand where the uproar is coming from. In other words, if you were not keen on the idea of an open marriage, then you simply wouldn’t marry someone that wanted one, right?

Some people pick and chose which openly married couple they want to be outraged about. Age does not matter, when it comes to being in an open relationship. We all have different sexual desires that need catering to. The most important thing is that openly married couples practice safe and consensual sex. Open marriages were a thing in the past and we should understand that everyone’s idea of what a marriage should be like will be different. What’s to say that openly married couples aren’t 100% happy with their situation? An open marriage celebrates sexual liberation while still allowing a loving couple to be united. If this does become the new norm in marriage then who are we to judge?
Thanks for reading this post. As always, I love to hear from the readers of It’s Kelle’s Space. What are your views on open marriage? Would you have an open marriage? Or do you think the whole idea is a no no?
I asked my Twitter followers what they thought in a poll and this is the result so far: 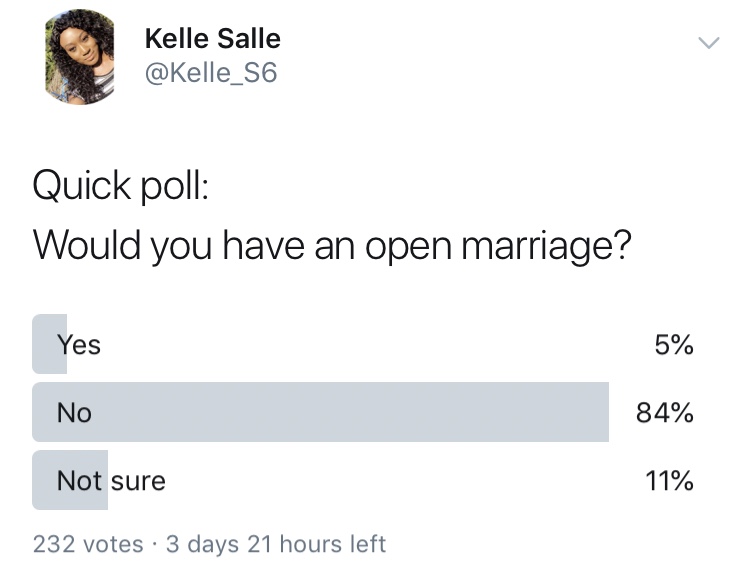 How To Make The Most Out Of Summer

Why Do Women Fall For The Wrong Guys?

How To Use Social Media In A Positive Way

The Importance of Self-Care: Practices For A Healthy Mind, Body and Soul

Its Kelle’s Space On Social Media

How To Make The Most Out Of Summer